Tired of losing eBay auctions for those rare A&M Records items you've searched long and hard for? Give the EZSniper eBay sniper a try!

From the third A Very Special Christmas CD comes Sting’s take on the traditional “I Saw Three Ships.” 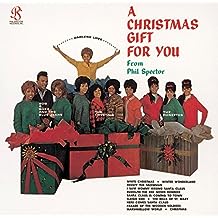 Today’s wall of (holiday) sound is “Sleigh Ride” by The Ronettes. This comes from an album assembled and produced by Phil Spector called A Christmas Gift for You, which also features other popular groups that Spector produced. With the early A&M albums sharing an engineer (Larry Levine) and studio (Gold Star), it’s a natural that this familiar soundscape fits right in!  Fortunately this is readily available on CD, and can also be downloaded in a high-res version from HD Tracks!

Hot off of the success of Squeeze’s three charting A&M singles “Slap and Tickle,” “Up The Junction” and “Cool for Cats” (from their same-titled second album) came this non-LP holiday track from 1979, “Christmas Day.”  This classic lineup features eventual co-leaders Glenn Tilbrook and Chris Difford (guitars and vocals), along with Jools Holland (of “Later with…” fame) on keyboards, Harry Kakoulli (bass) and Gilson Lavis (drums).  All are seen hamming it up in this forgotten video.

While known for his classic work with his Giants, Shorty Rogers also wrote numerous arrangements for A&M over the years, including collaborating on A&M’s obscure second LP by George McCurn.  On RCA, Rogers and his outfit recorded many great big band and small combo albums.  This “like, nutty” version of The Nutcracker is an album-long jazz treatment of Tchaikovsky’s original. We featured this last year, but good things bear repeating! We have compiled a playlist of all of the album’s tracks.  Apologies for the poor sound quality from the knock-off label that uploaded it. If you don’t have time for the entire album, at least catch the first track, the “Like Nutty Overture.”

Poking fun at holiday classics was always a lot of fun for DJ and award-winning radio host Bob Rivers. Not only do his parodies twist the lyrics into something new and hilarious, the musical and vocal details often mimic the originals quite faithfully. This is very apparent on his remake of the Carpenters version of “Sleigh Ride,” entitled “Flu Ride.”  His other parodies cover artists as diverse as Nat King Cole (“Chipmunks Roasting on an Open Fire”) and Black Sabbath (“I Am Santa Claus,” set to the melody of “Iron Man”).  Check out “Flu Ride” below, with the original Carpenters version just past the break. Enjoy!

As the original EP liner notes hinted, nobody but Stewart Copeland (of The Police) might know who Klark Kent is.  To kick off our holiday-themed posts for the year, we offer his unique twist on Christmas with the tune “Yo Ho Ho.”  Klark Kent appeared on the I.R.S. Records label, headed by his brother Miles, back when they were distributed by A&M.  This track appears on the I.R.S. compilation Just In Time For Christmas.  So while you might not be “ritch in a ditch” for the holidays, at least Klark spreads a little holiday cheer to make all of the grandelinquents feel just a little bit better.