Here’s a rarity– a single by The Magic Mushrooms.  This is one of those bands that released a single, but no album, on the A&M label.  Recorded in New York and produced by Philadelphia-based Sonny Casella, this track, “It’s-a-Happening,” is one of the earliest examples of psychedelic garage rock, sneaking onto the Top 100 chart at #93 for a single week.

Not surprisingly, there is no clue as to what “It” is (that’s a-happening).

Little is known about the band, although they did flit around a couple of labels, releasing a handful of singles and two albums that did nothing on the charts.

This tune may be best known via its appearance on the highly acclaimed 1960s garage rock compilation Nuggets: Original Artyfacts from the First Psychedelic Era, originally released in 1972 and still available today as the original 2-LP set, or an expanded 4-CD box set.

Our “lost” albums of the week are those albums which were assigned a spot in A&M’s album catalog but for whatever reason, were never released.  While Gary Taylor‘s album Just Gets Better With Time was never released, the song of the same title was released as a single on A&M.

If the tune sounds familiar, the song was also recorded by The Whispers, who many listeners will recognize from the hit single “Rock Steady,” on which Taylor sang backing vocals.  Taylor’s songwriting, production and vocal talents have been found on many recordings by such names as Anita Baker, Lalah Hathaway, Vanessa Williams and others.

Popular songs he has written includes “Keep in Touch” (Grover Washington, Jr.), “Living Without a Heart” (Vanessa Rubin), “My Heart, Your Heart” (The Whispers) and “Good Love” (by Anita Baker, Lonnie Liston Smith and others).  Gary Taylor’s official Web site is Morning Crew Music. Be sure to pay a visit!  And join our forum discussion here.

Back in November, Paragon Sight and Sound (Ann Arbor, MI) hosted Analog Night, which included a visit by Analog Planet/Stereophile vinyl journalist Michael Fremer, who I may have mentioned here in the recent past. Unfortunately I didn’t hear about it in time, but those who attended mentioned that it was an informative get-together.

Apparently Fremer had some time to visit another popular area attraction: Encore Records. Cool Cleveland caught up with him at the store, and he gave a few pointers on how he shops for used records. Turns out it’s nothing really too different than what those of us vinyl addicts do. I do many of the same things myself when I first set foot into an unfamiliar shop, which is similar to how my other vinyl hunting pals approach the task. I’m sure many of my fellow forum members do the same as well. We each have our own ways of doing it, but the basics remain. We scope out the shop to see how deep their selection is, we check titles we are familiar with to gauge prices, and we examine records closely for condition. A store with 40 ratty copies of Eagles Greatest Hits at $10 each is certainly not one I’ll remain at for long!

Here’s a glimpse of Fremer’s visit to Encore:

This is a store you can get lost in for a couple of hours. And I found it amusing that he located one of the bazillion copies of the Miles Davis You’re Under Arrest LPs that most record stores seem to be stuck with.

I stumbled across 5 Na Bossa quite by accident, as part of a search for Edu Lobo’s recordings.  For those unfamiliar with it, this album is a live recording on the Philips label from 1965, at the Paramount Theatre in Sao Paulo, featuring Nara Leão, Edu Lobo, and the Tamba Trio (Luiz Eca, Bebeto, Ohana) as a quintet, each being featured in turn.  This performance comes at the tail end of the Bossa Nova movement in Brazil, when artists like Lobo and Leão began to drift towards the Música Popular Brasileira (MPB) movement in Brazilian music.

Nara Leão (b. 1942) began playing guitar at age 12 to overcome childhood shyness, and after singing and performing for a few years, turned professional in 1963 and began touring.  She called Bossa Nova “alienating” in 1964, and was one of the early proponents of the MPB movement.  The change in Brazilian government to a dictatorship in the mid 60s, Leão’s music began to take a more political stance as a means of protest, and relocated to Paris.  By the mid 70s, she set music aside to raise a family.  She began recording more prolifically in 1979 when she was diagnosed with an inoperable brain tumor, and passed away in 1989.

As we are naturally inclined to do, there are a handful of A&M connections here.  First, Edu Lobo not only recorded an album for A&M (Sergio Mendes Presents Edu Lobo), he penned many of the tunes which Sergio Mendes and others would record for the label.  And speaking of Sergio Mendes, Leão toured with Mendes as a vocalist back in 1963.  Finally, Tamba Trio appeared on the A&M/CTi label with two albums and a commercially unreleased single.   All are featured in turn on this album. 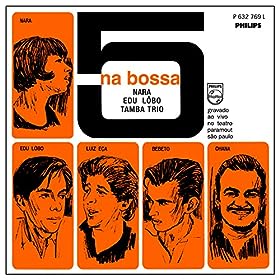 Sadly, the sound quality is rough on 5 Na Bossa, made even worse on the digital release I have by very heavy-handed noise reduction that muffles the sound.  Amazon has this available as an MP3 download, as does iTunes, for the curious; I have not checked it for sound quality.  Notable here are inclusions of Lobo’s popular track “Reza,” and the vocal pairing of Lobo and Leão on “Aleluia.”  Also, Tamba Trio’s two features utilize the same arrangements of “Consolação” and “O Morro Não Tem Vez” which would appear a few years later on We and the Sea.

While this isn’t exactly an essential recording, it does highlight a lesser-known Brazilian artist, and exists as an important document of Brazilian music at the time, Brazil beginning to weary of Bossa Nova and move to the more personal expressionism of MPB.

Explore more of Nara Leão’s recordings on Amazon and iTunes. And don’t forget to hop over and visit our World Music Forum, where comments are welcome.

A rare video capture of a television appearance.  Here is Herb Alpert singing (OK, lip syncing) “The Christmas Song.”  It’s like a time capsule of the 1960!  This was actually the very first single your A&M Corner host ever owned.

This is the last of our featured holiday tracks. We hope you have enjoyed them!

All of us at A&M Corner wish you and yours the best for the holiday season!

No holiday seems complete without an annual playing of The Nutcracker Suite.  If Tchaikovsky were inclined to do any swingin’, he’d be nutty about this version by Shorty Rogers and His Giants from 1960 (released on RCA LSP-2110).  Shorty’s arrangements even give the original titles a goodnatured tweak (“Waltz of the Snowflakes” becomes “Snowball,” “Tea Dance” becomes “China Where?”).

Lest we forget, A&M is what we do here, so we always try to find a connection.  It’s not hard with Shorty, as he was instrumental (no pun intended) in helping Herb Alpert out on some of A&M’s earliest albums.  The earliest being the second album A&M released, George McCurn’s Country Boy Goes To Town (SP-102), which we will feature in the near future.

Forgive the poor cover art and substandard sound quality (this looks like one of those offshored knock-off releases), but I threw together a YouTube playlist of the entire Swingin’ Nutcracker album for your Christmas Eve enjoyment.