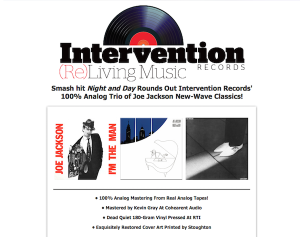 Coming this spring, Intervention Records is releasing three classic titles by Joe Jackson:  Look Sharp!, I’m The Man and Night and Day.  All are being cut straight from analog 15ips safety copies, featuring the mastering of Kevin Gray and plating/pressing by RTI.  The first two titles are due in “Feb/March” per Intervention, and Night and Day follows in April.  These come hot on the heels of two great A&M Stealer’s Wheel reissues, including their self-titled first album and Ferguslie Park,  which have seen very favorable reviews in the audiophile press.

Of Stealer’s Wheel, Michael Fremer of Analog Planet wrote: “Kevin Gray’s cut from ‘best analog sources available’ … is the best sounding version of this album I’ve yet heard. There’s more detail to be heard overall, better instrumental layering, greater transparency and more honest equalization (the “Porky” is upper-midrange “pushed”).  The first two Jackson LPs will be substantially upgraded over the originals.  Shane at Intervention writes: “Fans of those first two JJ LPs are going to be blown away! That top-end energy was still vibrant on the tapes, but were able to restore the bass foundation. It’s still a punchy, aggressive sounding record, but dramatically better balanced. I think you’re going to be more than pleased!”

We’re looking forward to these here at A&M Corner!