Fresh out of the Minneapolis music scene, Jesse Johnson signed with A&M in 1984 and released his first solo album, Jesse Johnson’s Revue, our featured album of the week. 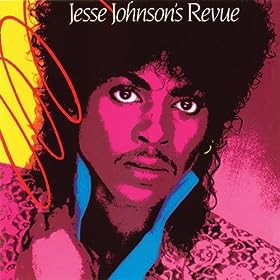 Johnson is an alumni of The Time, the Minneapolis-based funk/rock outfit that made a run on the R&B charts with hits such as “Cool,” “777-9311,” “The Walk,” “Jungle Love” and “The Bird.”  The last two were integral to the Prince film Purple Rain, which Johnson had appeared in with the group.  Shortly afterward, Johnson struck out on his own.  He would return to The Time for their album Pandemonium (which featured a lot more of Johnson’s guitar than the first three albums), and the original band would regroup again in 2008, tour, and in 2011 would change their name to The Original 7ven in order to get out from under the Prince-owned band name, “The Time.”  They released one album, Condensate, and Jesse left the band again in 2012.

Jesse Johnson’s Revue would peak at #8 on the R&B album chart and #43 on the Popular album chart.  The single “Be Your Man” rose to #4 on the R&B singles chart, while “Can You Help Me” reached #3 and “I Want My Girl” at #7.  Helping him on this album are two other alumni of The Time:   keyboardist Mark Cardenas, and bassist Jerry Hubbard.  Longtime Minneapolis colleague David Rifkin would fill the producer’s chair.

This album is available from Amazon as an MP3 download, and you can also find the out-of-print CD and vinyl versions there as well.  And, don’t forget to join our AOTW discussion thread over in our A&M Corner Forums!